KCC Portland Center is now open for in-person gatherings. Please check our calendar to see which KCC practices and study groups are virtual or hybrid (also on Zoom).

Kagyu Changchub Chuling is proud to support Kyabje Bokar Rinpoche’s Mahamudra Program, covering the preliminary and main practices of the mahamudra tradition. Over the past several decades, hundreds of aspirants have found the support and structure of this course a powerful support for launching them into a consistent daily practice. We heartily welcome and encourage the KCC community to participate in this skillful program and attend the annual Mahamudra Seminar to support their practice. 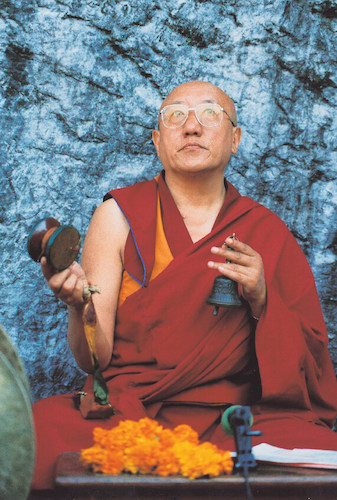 As a support for deepening one’s experience, participants are asked to commit to a program of practice consisting of the preliminary practices (ngondro) of the Mahamudra tradition, the main practices of shamatha, and the recitation of Chenrezi’s mantra.

Various shamatha meditation techniques are practiced daily for at least a half hour. The four preliminary practices are each practiced for one quarter of the year. Students are asked to complete 10,000 of each of them; this also takes about 40 minutes per day. The goal for the recitation of Chenrezi’s six-syllable mantra is 100,000 repetitions.

For those new to this tradition, there is an option to commit solely to the shamatha meditations and the recitation of Chenrezi’s mantra. However, for those who wish to proceed to the subsequent stages of insight (vipashyana) and mahamudra meditations in later years, the preliminary practices must also be completed.

After completing five years of the Mahamudra Program along with the requisite practice commitments, participants have the option to begin a yidam practice, personally selected by Bokar Rinpoche for his foreign students. Students gradually progress through outer, inner, and secret components of this practice. These seminars are currently offered only in India on a biannual basis.

KCC now offers the Bokar Rinpoche North American Mahamudra Seminar on an annual basis. Practitioners at all levels are welcome to participate. One must attend the whole seminar and be willing to take on the accompanying practice commitments.  Participants should have already received the vow of refuge—the formal act of becoming Buddhist—or be ready to take it. The refuge vow is offered at the seminar.

The teachings include an overview of the Mahamudra tradition. Participants are introduced to the various aspects of the preliminary practices, and there are guided meditations in the main practices of shamatha (calm abiding), insight, and mahamudra, according to how many years of the program one has completed.

Days begin with shamatha meditation and end with the Chenrezi practice. Detailed instructions are provided for all of the practices to be done over the course of the year, and there is plenty of time for questions and discussion. The daily schedule is fairly full but also allow for ample stretch breaks and time for rest and reflection.

To support the practitioner in the program, Lama Eric Triebelhorn offers quarterly teachings on the preliminary practices to review these meditations and clarify any questions.

History of the Program, the Founder and His Students

Kyabje Bokar Rinpoche (1940-2004) was a renowned master of the Karma Kagyu lineage and the principal lineage holder of Shangpa Kagyu, which he inherited from his root guru, Kyabje Kalu Rinpoche. Drawing from a lifetime of study, intensive meditation, and many years of experience as a retreat master, Bokar Rinpoche initiated this program in 1992 at the request of two senior western students. It allows modern lay people to remain involved with family and community while nourishing Dharma practice by committing an hour a day or more to formal practice. Rinpoche said, “Our approach with the seminar, at the very beginning, was to emphasize not rejecting work, family and so forth—but to integrate a daily practice into one’s lifestyle.”

Bokar Rinpoche traveled to Portland, Oregon in 1996 where he taught the seminar in the West for the first time. Bokar Rinpoche asked that Lama Michael Conklin and Lama Tara of Victoria, BC, co-host the seminar for practitioners in North America, which they did yearly until the beginning of KCC’s Three-Year Retreat in 2015.

Lama Eric Triebelhorn first came to KCC in the fall of 1995. He met Kyabje Bokar Rinpoche in 1996 and began practicing and studying under him. Having served as KCC president for four years and as the first caretaker of the SCOL retreat land, in 2002 he moved to India where he intensified his practice and study of Tibetan language.

Shortly before his passing in August of 2004, Bokar Rinpoche granted Lama Eric a seat in his newly built Shangpa Kagyu retreat center at his monastery in Mirik. He completed that retreat from February 2005 to September 2008, and continued to study and practice in Mirik, while also serving as translator for Khenpo Lodrö Donyö Rinpoche, His Eminence Gyaltsab Rinpoche and others. Since the recognition of Yangsi Bokar Rinpoche in January of 2015, Lama Eric has been offering him classes in English.

Steps for Making Mandala of Accomplishment